I will be the first to admit, while Magic Kingdom is the prettiest park, it is my least favorite at Walt Disney World, mostly because it always seem to be the busiest with thousands of strollers and crying children. But we always try to put in an appearance. Today we started there.

After wandering a bit and riding a ride, we had lunch at Be Our Guest, the Beauty and the Beast themed restaurant.  The inside is designed to look like different rooms in the Beast’s castle. The theming was very good; the food was okay, but I don’t know that I’d go out of my way to eat there again. But the only way to see the inside of the restaurant is to get a reservation to eat there. The mosaic “window” is spectacular. 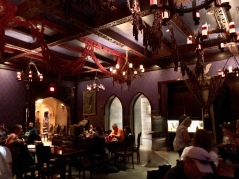 We saw a couple shows and the Dapper Dans before heading back to the room to rest and refresh. Then it was on to The Flying Fish — on the Boardwalk behind Epcot — for supper. This seafood restaurant has always been a favorite of ours, although prices have increased significantly since we last visited. The food and service, however, are excellent. I had the seafood pasta that came with lobster, shrimp, and scallops. So good!

After supper, we headed back to Epcot where we caught the Disney on Broadway concert with Ashley Brown and Josh Strickland. When we visited NYC a few years back, we actually saw Ashley on Broadway when she originated the role of Mary Poppins. She has a fantastic voice. Josh originated the role of Tarzan on Broadway. The concert was very well done. We stayed for the new fireworks show before calling it a day. Logged about 17,000 steps today and I’m feeling it!

It’s hard to believe, but it’s been 3 years since we’ve been to Disney World in Orlando, Florida. We left our house yesterday at 5am to catch our flight south … and then sat in the plane for 2 hours waiting to be de-iced. Which meant we missed our connecting flight from Chicago and had to be rebooked on a later flight. But 11 hours after we left home, we finally arrived at Animal Kingdom Lodge, our home for the next week. From our balcony, we have a wonderful view of the animals on the savannah.

Today, we decided to visit Epcot. We started at The Seas, where we watched divers feed the large rays. Then we headed to the France pavilion in the World Showcase for breakfast while we waited for the rest of the Showcase to open. We went to the Beauty and the Beast sing along after breakfast, before shopping — and snacking — our way around the world. The Japanese pavilion is always my favorite place to shop … they have such an unusual selection. Today I found shoelaces made from kimono fabric. I had to buy a pair for fun, in addition to origami paper and unusually flavored gummy candy.

After making our way around the showcase, we took the new skyliner to check out the Riviera Resort, which just opened a couple months ago. We found an archway at the resort with incredible mosaics, including one of Cinderella’s castle. 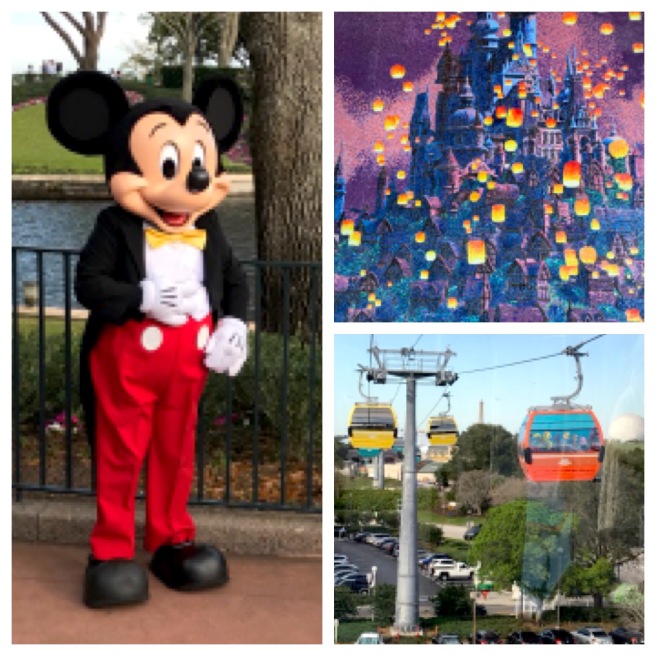 Afterwards we headed back to Epcot for an amazing French dinner, complete with chocolate tart. We were going to stay for fireworks, but were too worn out to even walk back to the front of the park. So we hopped on a boat to Disney’s Hollywood Studios where we caught a bus back to our resort.

Tomorrow, we’re on to Animal Kingdom to check out Pandora.

It’s January in Michigan … which means it’s time to start thinking about vacationing in a warmer climate with our favorite Mouse. I found this cute Mickey bandana and decided to make a vacation outfit complete with matching tote bag and vintage Mickey ears. Available now in my Etsy shop.